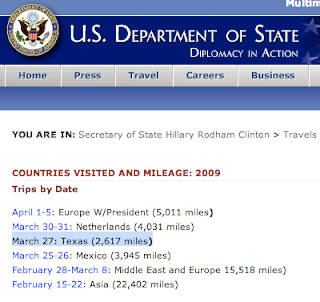 It seems that our State Department, under the brilliant, dynamic leadership of President Obama and Secretary of State Clinton, doesn’t realize that Texas is part of the United States. It lists as part of the administration’s accomplishments Clinton's travels to Texas.

It make a certain amount of sense. Since candidate Obama claimed there were 57 states, there’s no reason to expect his Secretary of State to know what states are actually part of the Union.

This is from the State Department’s official news release about its first 100 days.

In the first 100 Days of the Obama Administration, Secretary Clinton and the State Department have made significant progress in advancing America’s national security goals and promoting America’s values around the world.

Secretary Clinton is already the most traveled Secretary of State in a new Administration. The Secretary’s trips have included her inaugural trip to Asia, the Middle East and Europe, Mexico and across the border to Texas, the Hague in the Netherlands, Europe with President Obama, Haiti and the Dominican Republic, the Summit of the Americas in Trinidad and Tobago with President Obama, and to Iraq and Kuwait.

Posted by Desert Rat at 9:06 AM No comments:

We Will Not Be Bullied Into Socialism

I wish I was as expressive as is this young woman.

This reminds me of an incident when I had just turned five.

My mother heard me making fun of a playmate's name. She took me aside and told me that since I was five years old, I was a big boy and big boys never made fun of people's names. Only babies did that.

I guess progressives' mothers never had that discussion with them.
Posted by Desert Rat at 8:00 PM 2 comments:

Posted by Desert Rat at 1:54 PM No comments:

Who Knows Where The Time Goes?

I've just marked another year's milestone on my life's journey. I am a huge fan of the late Sandy Denny. Her signature song, which she both wrote and sang, sums up my feelings.

Who Knows Where The Time Goes