The Democrats succeeded in passing their “Stimulus Bill.” Part of this package included a section pattered after disgraced tax cheat Tom Daschle’s book, “Critical: What We Can Do About the Health Care Crisis,” which creates a a new federal agency — The Office of the National Coordinator for Health Information Technology, funded to the tune of $700 million.

Putting aside the question of how this fits into a bill the Democrat Party and Obama apologists claimed was for job creation, it does do some frightening things.

Attorney and author Cameron Reddy explains in this important article.
Posted by Desert Rat at 6:18 PM 1 comment: Links to this post

Lookin' for Hate in all the Wrong Places

Akbar Ahmed, the Ibn Khaldun Chair of Islamic Studies at American University, was in the town of Arab, Alabama, as part of a six-month tour across the US to study the American identity through the lens of Muslims. As part of their study, team member Hailey Woldt dressed in traditional Islamic clothing disguised as an Arab to get some reactions from the local community.

They expected hate and bigotry. Instead, they found Southern hospitality.

Posted by Desert Rat at 8:05 AM No comments: Links to this post 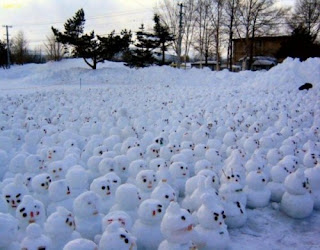 Posted by Desert Rat at 7:25 AM No comments: Links to this post

A disasterous winter storm stuck Kentucky a week ago, killing 24 and leaving 700,000 without power in the freezing weather. It took a week for the Obama Adminstration to notice, despite the state calling up its entire National Guard to deal with the crisis. Local officials say FEMA failed to even contact them, much less show up with any kind of aid.

Reason Online has the story.
Posted by Desert Rat at 8:42 PM No comments: Links to this post

Change We Can Believe In

Well, what do you expect from a political movement whose slogan ends with a preposition?

For the more mature...

Posted by Desert Rat at 8:02 AM 2 comments: Links to this post

With each passing day, the mainstream media is dropping all pretence of objectivity or fairness. The latest example is former Democrat-operative-turned-journalist George Stephanopoulos, ABC’s chief Washington correspondent and host of the Sunday news program “This Week With George Stephanopoulos.”

At the very least, there is the appearance of impropriety on the part of Stephanopoulos. This is a clear violation of the Society of Professional Journalists Code of Ethics. Among those tenants are:

— Avoid conflicts of interest, real or perceived.
— Remain free of associations and activities that may compromise integrity or damage credibility.
— Disclose unavoidable conflicts.
— Be vigilant and courageous about holding those with power accountable.

The Media Research Center, a watchdog group, has written an open letter to ABC President David Westin asking that the network publicly address and resolve this issue. So far, both Westin and Stephanopolous have responded with silence.

It is no wonder why the mainstream media is losing viewers and readers. The public no longer trusts them, nor do they deserve to be trusted.

Posted by Desert Rat at 8:47 PM No comments: Links to this post