The War and the Deficit

One of the favorite claims of progressives is that the war is responsible for the burgeoning deficit.

However, the facts simply don't support that claim, as is illustrated by this chart from CBO data showing the deficit with and without the war expenditure from 2003 to the present.

Note that the deficit continued to decline until the Democrats took over Congress in 2008 and the skyrocketed when Obama assumed the presidency.

For more information, read this article from the American Thinker.
Posted by Desert Rat at 10:10 AM No comments:

The ‘What a Maroon’ Award

And now, ladies and gentlemen, the moment you've all been waiting for ... This week's "What A Maroon" award goes to...

RUSSELL SIMMONS
Simmons, founder of the hip hop label Def Jam, was a guest Wednesday on the "Larry King Show." Simmons came down solidly in favor of favor of keeping the proposed Islamic cultural center two blocks from Ground Zero.

"...it would be a terrible idea to move the mosque," Simmons stated.
After all, in his words, "If you're blaming Muslims for the attack on 9/11, then you need to change your mind. We didn't - did we blame Christians at the first World Trade attack? We didn't"

Simmons seemed to be under the impression that Christians were behind 1993 World Trade Center bombing. The attack, which killed six and injured more than a thousand, was actually carried out by Islamic extremists.

Someone apparently told the clueless Simmons about his gaffe, because the following day, he tweeted "Made critical error on CNN last nite. Was thinking of last major terrorist attack on US soil in OKC by McVeigh & mispoke"

Yeah, sure. He should also have been cued in that McVeigh was an atheist who bombed the Murrah building in revenge for the federal massacre at Waco, Texas. He also forgot that the 19 terrorists responsible for 9/11 were all muslims who claimed they slaughtered 3,000 innocent souls in the name of Islam.

In honor of the great American philosopher Bugs Bunny, who first coined the phrase, I've decided to present the "What a Maroon" award each week to the politician, organization or celebrity who makes the most sand-poundingly stupid statement of recent days.
Posted by Desert Rat at 6:19 PM No comments:

House Speaker Nancy Pelosi has weighed in on the controversy considering the proposed construction of the $100-million Islamic Culture Center, including a mosque, two blocks from Ground Zero.

There is no question that there is a concerted effort to make this a political issue by some. And I join those who have called for looking into how is this opposition to the mosque being funded.

Here are some of the people Speaker Pelosi wants to investigate.

Commentator Juan Williams doesn't care. That's what Williams said this weekend. Williams and others were discussing Missouri's Proposition C, which is aimed at blocking the Obamacare command that everyone must buy health insurance or face punishment.

Missouri voters overwhelming approved the measure with 71% of the vote.

Well, Williams said that didn't matter. After all, only old white people voted for Prop C.

Posted by Desert Rat at 2:16 PM No comments:

The 'What A Maroon' Award

And now, ladies and gentlemen, the moment you've all been waiting for ... This week's "What A Maroon" award goes to...

ROSANNE BARR
It seems that anti-Semitism is on the rise among the Hollywood set in recent times. First, actor/producer Mel Gibson spews anti-Semetic venom to a traffic cop; more recently, producer Oliver Stone blames Jewish control of media for Hollywood not protraying the human side of Adolph Hitler. The latest entry is comedienne Rosanne Barr.

I used to believe that Rosanne could sink no lower then when she sang an off-key version of the "Star Spangled Banner" while grabbing her crotch. I was wrong.

Barr's excursion into anti-Semitism goes beyond mere bigotry into the realm of irrationality. On her "Rosanne World (Insights from the Domestic Goddess)" blog, Barr maintains, among other things: "Many of the Palestinian people are jewish and became christian after Israel stole their land and homes," "Zionists are German" and that "The scientists of the Reich successfully created a mutant human--a hybrid of Jewish mentality and German Resolve, the Zionist." In addition, she reveals that top Nazis Hitler, Heinrich Himmler and Joseph Goebbles were Jewish.

There's no video to this, just this link to her blog she makes her claims and this picture of her at a photoshoot for Heeb magazine. 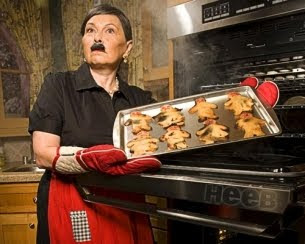 In honor of the great American philosopher Bugs Bunny, who first coined the phrase, I've decided to present the "What a Maroon" award each week to the politician, organization or celebrity who makes the most sand-poundingly stupid statement of recent days.
Posted by Desert Rat at 1:03 PM No comments:

Did You See This on the News?

Nope, I didn't either. It's not like they're Tea Partiers, so why should the MSM cover it?

Actually, I hope they keep it up. It only gains support for those who oppose illegal immigration and amnesty.

Posted by Desert Rat at 6:29 AM No comments: